The biggest temple of all the temples in Bagan, was abandoned when King Narathu,whom got it erected, was assassinated.
The story behind this lunatic king is that he killed his father and his brother, so that he could step up on the throne.  Later he also killed his wife, and I have reasons to believe that it was her father that got Narathu killed eventually.
Most temples, as you may see, has the shape of a leaf, but the Dhamma Yangui is shaped like a pyramid. Some locals believes it is haunted, and it hangs a certain kind of mystique around the temple.
If you do not find the Dhamma Yangyi temple interesting, there are several more to choose from. Bagan is in fact an entire forest of stupas, temples and pagodas, and they are a beautiful sight as they reminds us of ancient times with all their mystique and tranquility. 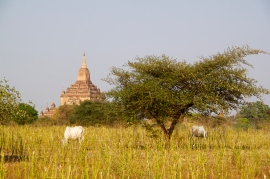 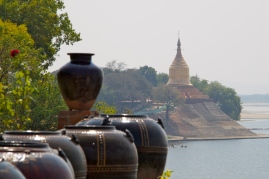 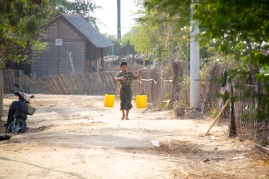 The farmers in Bagan operates their agriculture between the stupas, as they have done since ancient times. Our guide took us on a tour of the village and we got to meet the farmers and learn about their hard, but also quiet farmer’s life. The cows that came in from the pasture was the signal for us to go and take pictures of the  beautiful sunset over Bagan.

Bagan is one of the most beautiful places in the world. Should you be in the area, do pay a visit, you will not regret it.